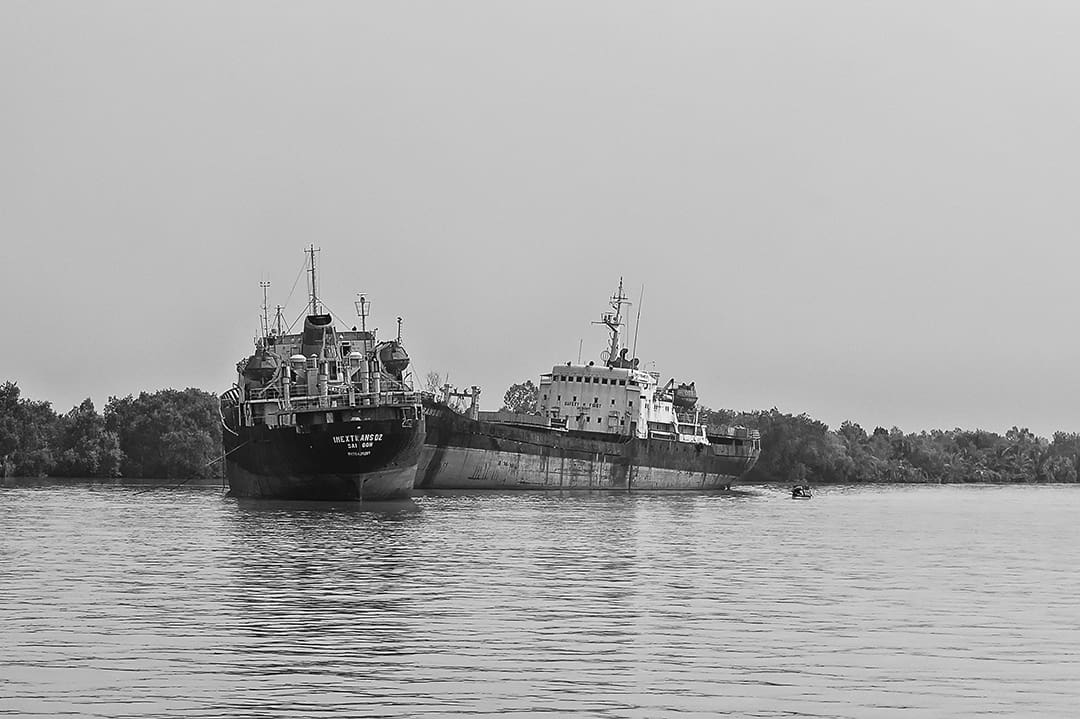 TRUTH – GETTING THE RIGHT PERSPECTIVE

Looking through some photographs, I was reminded by the two images in this blog, about the importance that perspective plays in photography.

Simply put, perspective is ‘the appearance of viewed objects with regard to their relative position and distance from the viewer’. Often we think of those fun, trick or forced perspectives, such as someone trying to straighten up the leaning Tower of Pisa, or picking up the Eifel Tower nipped between finger and thumb, or resting the sun in the palm of your hand.

Travelling along the Saigon River, Vietnam, I caught sight of two ships that had collided. Such was the speed at which we came upon the unexpected drama that I immediately began taking photographs, knowing they would add a dimension of excitement to the story I was building of my Vietnam trip. The boat I was on was travelling fairly quickly, so I was intently focused on framing the best compositions in the short time available, before the ships would disappear from view. In parallel, from the first sighting of these piled-up ships, my mind was considering possibilities as to what had happened. Thoughts ranging from unyielding captains to giving way, thick fog, mechanical failure, drunkenness. Almost as quickly as we’d come upon the scene an answer of sorts revealed itself as the perspective view I had of the vessels changed as we passed by. Nothing! Nothing had happened.

The image was dramatic, because the ship nearest to me, viewed from the stern, appeared to have ridden up the bow of the other ship. I travelled on in anticipation of seeing the damage, only to be presented with the dull truth: two ships moored-up in close proximity. The ships had neither cargo nor ballast and were riding high at the bow.

There is much that can be said about perspective in its different applications. For me, as a photographer, it plays two major roles:

The challenge to photographers comes with how an image is intended to be used. As an art form, perhaps anything goes (but always the better, in my opinion, when supported by a few words about intent). As a documentary form – telling it as it is – no one can argue that the headline image isn’t true. Of course it is. It is just that it is potentially misleading truth of the situation; that only becomes apparent from the second image. I believe that photographers have a responsibility to be genuine, truthful, about how they use images – a sensational image can easily be qualified by a brief side note. But, with the passing opportunity to capture a quick photograph there exists naivety about a situation, because the opportunity to verify, fact check and show wider context is often denied us, even if we care to want to know more. At any one moment this puts a photographer somewhere on a scale between being a traveller and an investigative photojournalist.

I think viewers, of photographs, have a responsibility, too. I’m not suggesting that they should automatically doubt a photographer’s intent, but to be open-eyed, questioning what they see, trying to get an understanding of context. The typical estate agent’s image of the perfect medieval cottage is sure to be a magnet to many househunters and lifestyle dreamers, but revealing a wider image context, whether it be the industrial estate across the road, or powerstation on the horizon is likely to be as sobering as it is disappointing.

On a Broad Reach →